Why was Tollund Man hung?

We know how Tollund Man died. He died by hanging one winter’s day or early spring. Shortly after the hanging he was cut down. Somebody closed his eyes and mouth and placed him in a sleeping position in an old bog. But why he was hanged is much harder to tell. Was Tollund Man a criminal? Did somebody want to get rid of him and thus hung him? Did he commit suicide or was he a sacrifice to a god in order to keep the god satisfied?

We have no written materials from the period of time in which Tollund Man lived but the Roman Empire in Italy had people who could both read and write during this time. One of them was Cornelius Tacitus, who wrote down narratives told by traders who visited Northern Europe. The traders told about the wild tribal peoples living to the North.

Somebody cut down Tollund Man, put him in a sleeping position, closed his mouth and eyes and placed him at the bottom of a bog, presumably only wearing a belt, a cap and the rope in which he was hanged. 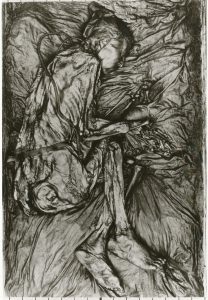 Tollund Man was laid down in a sleeping position with his legs and arms flexed. Photo Lennart Larsen