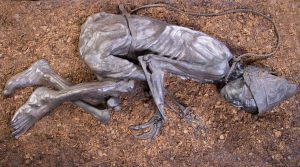 Already during the time of excavation, it was contemplated how it would be possible to save this find for the future. Silkeborg’s Museum Association had expressed a wish to the National Museum of being able to exhibit the Tollund Man at the new Silkeborg Museum, which was in the process of being established at one end of the Silkeborg Manor. Therkel Mathiassen from the National Museum rejected the idea of a full conservation though, simply because they did not know how to do it, and that it would be too macabre. Instead, he advised to have a go with the head, cap, rope and belt. Silkeborg’s Museum Association must have accepted it, as that is how it came to be. 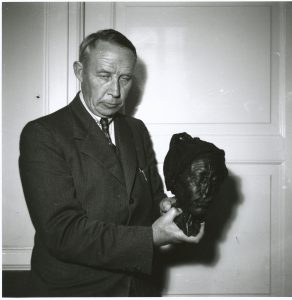 In 1950, bog body conservation was in its infancy. One of the bodies from Borremosen was left in a formalin resolution, but this was not a viable solution for the Tollund Man as he was going to be exhibited. Instead, B. Brorson Christensen and Knud Thorvildsen were inspired by a treatment that came from the preparation of biological material for microscopic examinations. The conservators had to be very careful that the head did not decay or become deformed. Desiccation became the chosen method as removing the water would prevent bacteria and fungi from breaking down the head However, the water would have to be replaced with a stable solid substance, which would prevent the body from losing its shape, just like a sundried tomato, once the water has evaporated.

In short, the method aimed to replace the water with wax and paraffin. The process took over two years and was successful beyond expectations. In June 1952, Therkel Mathiassen handed over the newly conserved head to Silkeborg’s Museum Association. 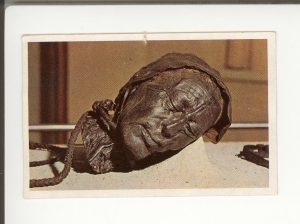 Tollund Man’s head, as it was displayed for many years in Silkeborg Museum.