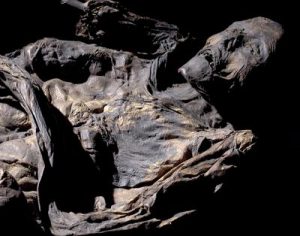 She was found May 19, 1879 in Huldremosen, near Ramten in Jutland. Initially it was believed to be a man who had disappeared some years before. The body was brought to a nearby farm where it was examined by the district doctor S. A. Steenberg from Grenå.  Once long hair was discovered on the corpse, it was concluded that this was a woman. She was unwrapped from the garments, she was wrapped in. In addition to two sheepskin capes she wore a skirt and a scarf, which had been wrapped around the head, and a bladder that contained a leather strap, a blue headband in wool and a horn comb. The bladder had to be cut open in order to get to the objects, so it is probably some kind of amulet.

Following the investigation, the body was quickly buried in Ørum Cemetery. However, on May 24 it was dug up again as the National Museum wished to obtain the corpse as well as the garments. Steenberg cleaned the clothes and hung them to dry on his own clothesline in the garden. It was then shipped to Copenhagen on May 27.

The National Museum examined the corpse, after which it was decided to keep the clothes and offer the body to the Normal-anatomical museum. Fortunately they accepted as it would otherwise have to have been re-buried.

Now, Huldremose Woman rests once again at the National Museum, where she can be seen in the antiquities exhibition.

The woman dates to 95 AD + – 100 years. The cause of death is unknown. The body has sustained several injuries, but it is not possible to see if they were inflicted before or after her death. A theory that severing her right arm was the cause of death cannot be confirmed. Despite the lack of evidence, there is reason to believe that she did not die of natural causes. Today, Huldremose woman is exhibited at the National Museum in Copenhagen. 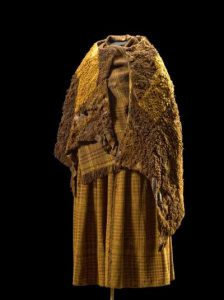