How Tollund Man was discovered 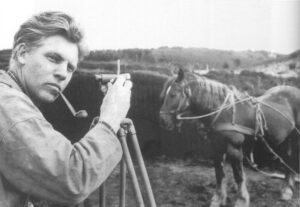 May 6, 1950 the brothers Emil and Viggo Højgaard together with Viggo’s wife, Grete, made one of the world’s most treasured and admired archeological discoveries. They found Tollund Man. They were digging peat in the bog when Emil’s peat spade struck something hard. A couple of days before discovering Tollund Man, they had found two peat spades from Early Iron Age. Perhaps this find made them extra alert and, consequently, stopped digging in order to have a look.

When they saw the well-preserved body, they believed it was a fresh corpse. Had a crime been committed? Police was summoned but they soon concluded that it was an ancient body and thus a case for Professor P.V. Glob from Aarhus.

P.V.Glob had no doubt either that this was a case for the museum workers. He estimated that the body was approximately 2000 years old and, at his request, a box was built around the body in order for it to be moved to the National Museum’s Conservation Department where it would undergo a professional excavation. The body was found approximately 2.5 meters down in the bog, nearly at the bottom of the bog, presumably in a peat bog from the Iron Age.

Grete and Viggo on site

A crowd around Tollund Man