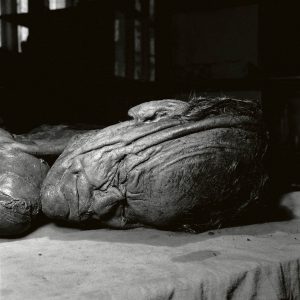 He lay on his stomach in the bog, with right leg bent and right arm twisted backwards, somewhat deformed by the pressure of the overlying strata. The body was completely naked and investigations revealed that he had been executed with an incision through the neck. Furthermore, there was a lesion on the skull and a fractured tibia. The skull fracture is probably caused by the many years of pressure from the bog or the traffic in the bog during peat extraction. The fractured tibia, on the other hand, he suffered while still alive. He was about 30 years old and 175 cm tall, and apart from incipient arthritis and periodontitis he was otherwise healthy when he was killed. His last meal consisted of a porridge of several different cereals, including barley, emmer and oats, as well as seeds from over 60 other herbs and grasses. The lack of fresh berries and green suggests that he died during winter. The presumption also fits well with the corpse being so exceptionally well preserved.

Grauballe man is dated to about 290 BC and this almost makes him a contemporary to the Tollund Man and Elling Woman.

After a short exhibition period just after the discovery in 1952, he was preserved by tanning with oak bark and subsequent treatment with different oils. Grauballe Man is exhibited at MoMu in Aarhus. 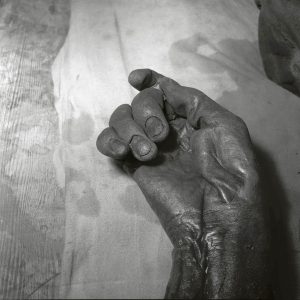