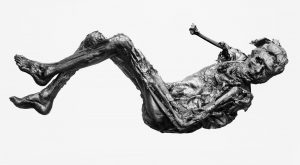 Borremose Man was found in Borremose Himmerland in 1946. Once again it was peat diggers, who came across the preserved body. In 1947, yet two more bodies were found in Borremosen. Everything suggests that he died a violent death, but exactly what killed him we cannot say for sure. He was found with a hemp rope around his neck, made by three twisted thinner strings. The loop of the rope was 36 cm, and might have been tightened in order to strangle the man.

A severe head injury may also have been what killed him, but perhaps it is just as likely that this and a breach of the right femur are caused by pressure from the bog. Borremose Man was naked when he was found, but two skin capes were found next to him, both of which were made with the same sewing technique as Elling Woman’s fur cape. On the skins capes lay a birch pole.

Analysis of his stomach contents has shown that his last meal contained seeds of different kinds: knotweed, common spurrey, sheep’s sorrel, lambsquarters but also animal hair and peat moss leaves. Hair and leaves are probably contamination in the food.

A Carbon-14 dating of Borremose Man dates his death to the year 840 BC + – 80 years, which places him in the latter part of the Bronze Age. 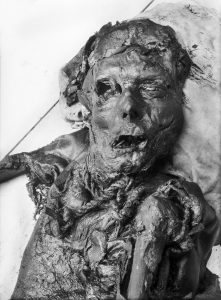