What can Strontium isotope analysis tell about Tollund Man? 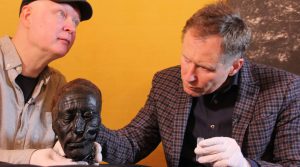 Strontium is a trace element that is present in our surrounding environment. The amount of strontium varies from region to region, and a region’s level of strontium, so to say, leaves an imprint in human’s bones and hair. The strontium level in the inner centimetre of our hair, for example, will show where we have been for the past month. If the sample is taken from the part of the skeleton that was formed in early childhood, the sample may say something about where a person grew up.