Roman sources on punishment and sacrifices

The Roman author Tacitus wrote, among other things, “traitors and renegades hang in those trees, cowards, gutless and unnatural fornicators are pressed down under a wicker hurdle into the slimy mud of a bog”. Another place Tacitus writes that a Germanic tribe, the Semnones (settled in Northern Germany) sacrificed people. Both narratives are in accordance with Tollund Man as well as many of the other bog bodies, although Tacitus wrote his narrative app. 400 years after Tollund Man was dead. If any of Tacitus narratives would fit Tollund Man, it would have to be the last. One thing is clear – Tollund Man’s peers could not have been enemies – despite them hanging him! It is hard to imagine they would have carried him into the bog and carefully placed him in the sleeping position in which he was found if they had considered him a common criminal. Additionally, several forensic examiners believe it is highly likely that they also closed his eyes and mouth. All this considering, it seems unlikely his hanging was a punishment. 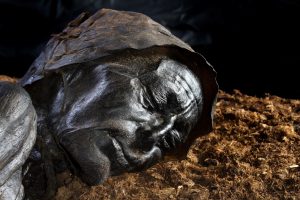