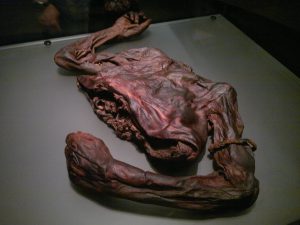 Photo. The National Museum of Ireland

Old Croghan Man was found near Dublin just 25 miles from Clonycavan Man’s finding place. Only the upper body with arms are found. The head is severed from the body and the body is ripped apart, both in ancient times. The body has several wounds. The left upper arm has a wound that he may have gotten in an attempt to ward off an attack. He has been stabbed in the chest, hit in the neck and the head has been severed from the body. Furthermore, his nipples seems to have been mistreated. He could be a sacrifice to the gods in a religious ceremony. Another theory is that he is a king who has been deposed by his people and executed.

Judging by the length of his arms he would have been approximately 198 cm. in height, which would have been exceptionally high for his time. Around one of his biceps was a leather band with two bronze fittings. The leather band is made from two leather strips with interwoven slots, just like the leather robe that Tollund Man was hanged in.

Analysis of his hair and nails suggests that he lived on a diet that often contained meat – no doubt a luxury in the Iron Age. His last meal, however, did not include meat but consisted of cereals and buttermilk.

He has been dated to between 362 and 175 BC. Old Crochan Man is on display at the National Museum of Ireland.