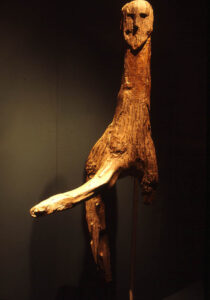 Tollund Man and Elling Woman are not the only ones who ended their days violently for then to be placed in an old peat bog. Bjældskovdal Bog alone has presumably housed three bodies. Besides Tollund Man and Elling Woman, a body was found in 1927 but it was never recovered. In Borremosen, no less than three bodies have been found in the late 1940’s. Only two years after Tollund Man was found, Grauballe Man was found just north of the city of Silkeborg. In addition, a number of other bodies have been found in other parts of the country. Hence, it is possible to identify an actual pattern.
The question of why arises. Why were people in the Early Iron Age being hanged or otherwise killed for then to be placed in bogs? Why did they have to die?

The three most common theories suggests that these people were criminals, suicides or sacrifices to the gods. For a person from the Iron Age, the bogs must have been an unsettling place full of mystery and danger. Not water, but not land either. Ever since the Neolithic Era, people have connected the bogs with something cultic or at least done things that we perceive as being religious-related rituals.

Are the bog bodies executed criminals?

Are the bog bodies suicides?

Bjældskovdal, where Tollund Man and Elling Woman were found.