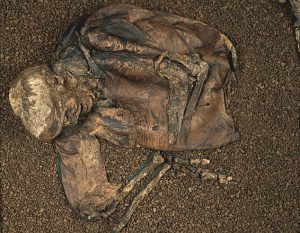 Lindow Man, also known as Pete Marsh, was found in Lindow Bog in northwestern England in 1984. He was found in connection with modern mechanised peat digging. He is preserved from the waist up and his right lower leg is preserved as well. He was naked when he was found. He was killed before the deposition in the bog, and it seems that he was strangled, had his throat cut, was beaten in the head and had a broken rib as well. He is an example of overkill, as we sometimes see with bog bodies.
He was probably in his mid-twenties when he was killed, and otherwise healthy. The dating places him between 2 BC and 119 AD. He is preserved by freeze-drying and is now on display at the British Museum in London.