How did Tollund Man die?

Tollund Man was examined as if he was the victim of a murder. The examination took place at Bispebjerg Hospital in Copenhagen, Denmark shortly after he had been discovered and excavated. The forensic examiner’s report states, among other things, that “the rope, judging by the way it was placed around the body’s neck, was most likely not used for strangulation, and because of that it is of less importance that the cervical vertebras were undamaged as this doesn’t always happen in hangings”. X-rays had revealed that Tollund Man’s cervical vertebras were not broken but despite of that the forensic examiner was certain that the man had been hanged. Later examinations by other doctors confirmed this. This means that Tollund Man had been hanged in a way, which caused suffocation, and not by the combination of suffocation and breakage of cervical vertebrae. This combination is seen in the so-called English form of hanging in which the condemned drops from a height, whereby breaking the neck. 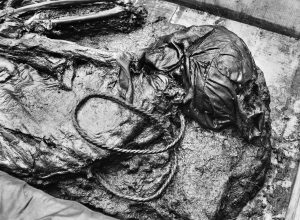