Excavation and the preliminary investigations 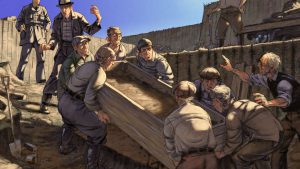 After an 8-day rail travel, Tollund Man arrived in his crate to the National Museum, where the actual excavation could begin. This was conducted by Conservator Knud Thorvildsen, who was particularly familiar with bog bodies, as he had dug out no less than three of those in Borremosen during the last half of the 1940’s. At the excavation, it quickly became clear that especially the feet and the head were remarkably well preserved. It was particularly noticed that the forehead wrinkles and stubbles were visible. From the well-preserved genitals, you could also tell that this was a man. He lay on his right side with his legs drawn up against his body and his arms bent in front of the body, almost in fetal position. The eyes were closed and the eyelids were vaulted as if still covering round eyeballs. The mouth with the well-preserved lips was also closed, and all in all the face displayed a peaceful expression, almost as if he was asleep. 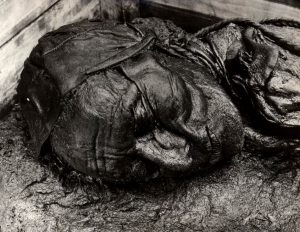 His head was covered by a tightly fitted leather cap, which was secured with two thin leather straps under his chin. Thorvildsen could surmise the cause of death in all its horror. A braided leather rope with a running noose was still tightly secured around his neck. Around his waist was a leather belt but the body was otherwise naked.

After the excavation, Tollund Man was transported to Bispebjerg Hospital where an autopsy was performed. 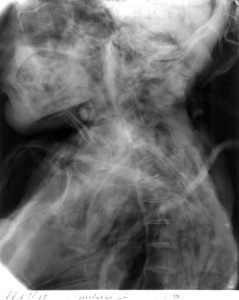