Elling Woman is famous for her elaborate hairdo. Photo Nationalmuseet in Copenhagen.

Elling Woman was found in Bjældskovdal on June 20th 1938, less than 100 meters from the place where Tollund Man was later to be found. When peat workers came across the first remains, they summoned amateur archaeologist Søren Jensen. At first, he believed it to be an animal and incautiously excavated the corpse. Once a woollen belt emerged, he realized that this was more likely a human being and called upon the National Museum. At this stage, the part from the feet up to the pelvic had been destroyed, but the remains were excavated in the turf in which she lay and later carefully excavated at the museum. 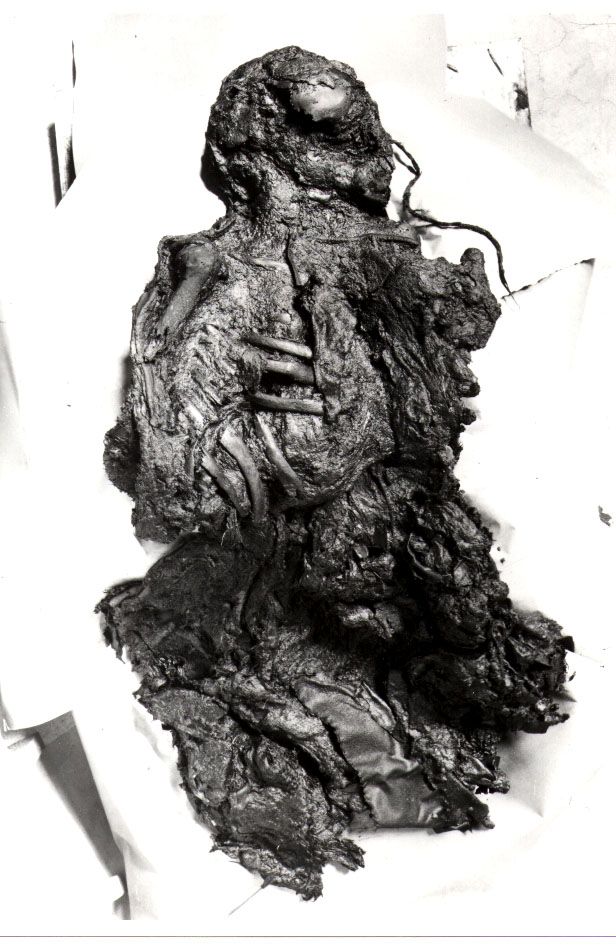 Elling Woman’s torso. Front view. The lower part of her body was destroyed during excavation as she was thought to be an animal. Photo Nationalmuseet in Copenhagen.

Elling Woman was presumably laid down in the bog wrapped in two skin capes, whereas one was sheepskin while the other is believed to be of calfskin. Her hair was done in an elaborate hairdo. Before she was placed in the bog, she was hanged, which the deep hanging furrow in her neck reveals. A leather cord that was found alongside her is, in all probability, the cord she was hanged in.

Elling Woman is one of the three bog bodies that we know of from Bjældskovdal. In addition to Elling Woman (1938) and Tollund Man (1950), a body was found in 1927. However, it was never recovered due to water penetrating the peat grave. The following year it was not possible to locate the body.

Elling Woman dates back to 355-205 BC. She is exhibited at the Museum Silkeborg Manor.