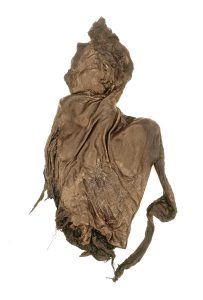 Photo the National Museum of Ireland

Clonycavan Man was found in Clonycavan near Dublin. Half had been destroyed by a peat machine, but archaeologists managed to find the corpse’s upper body and head. He had suffered a blow to the skull and the bridge of the nose with an axe. Hair analysis suggests that he lived on a predominantly vegetarian diet. He was killed in the summer or early autumn, when there has been an abundant supply of vegetables. The hair is rather unique since it was arranged in a kind of a knot bun on top of the head, held in place by a mixture of oils and pine resin. The latter has been imported from France or South-west Spain. He has been dated to between 392 and 201 BC. He is exhibited at the National Museum of Ireland.