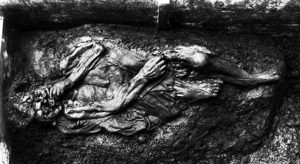 Borremose Woman, being the third body disclosed by Borremosen, was discovered in 1948. The body was placed in the bog face down. She was wrapped in a 175×115 cm large woolen blanket, which was probably originally a skirt.

When she was found, it was assumed that she had suffered a violent death. The front head was completely crushed. The scalp with hair was torn off and lay above or in extension to the head. She underwent a forensic examination in 1984, but the study concluded that it was not possible to determine whether the cause of death was by murder, suicide, accident or natural causes. It was not possible to determine either if the woman was dead before she was put into the bog water. Before reaching this conclusion, it was examined if any bleeding in the facial soft tissue could be detected or if any blood had entered the trachea. However, the examination did not show any signs of these blows being inflicted while she was alive.

Borremose woman is dated to around 700 BC, and is thus from the Bronze Age. She is now kept in the National Museum in Copenhagen, where she is usually not exhibited. She is stored in a formalin solution, and is the only Danish bog body, which has been stored in a wet condition since she was found.